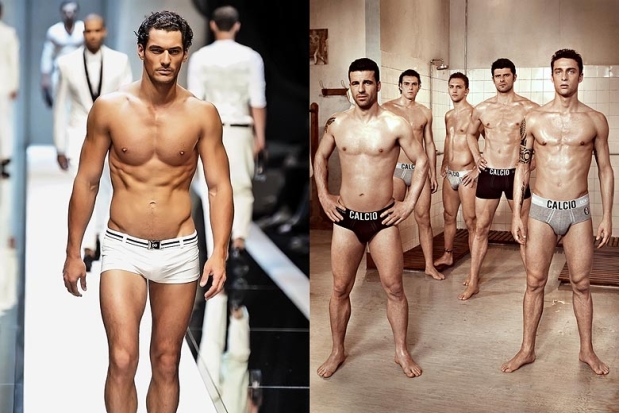 Giorgio Armani has plastered the city with pictures of Cristiano Ronaldo wearing nothing but his underpants, approximately two pints of hair oil, and a snarl. Missoni is having a grand public fashion show and Ermenegildo Zegna is kicking up a fuss about its 100th anniversary.

Really though, they needn’t have bothered — for when Men’s Fashion Week begins in Milan today the city will be fixated wth Dolce&Gabbana. To mark 20 years creating men’s clothes the designer partnership has launched an unparralleled charm offensive in a city that is both their base and one of the world’s most fashion obsessed: for every five euros spent in Milan, one is on clothes or other luxury goods. The Ronaldo campaign is dwarfed by posters of Madonna in the sunglasses she designed for D&G, and almost the entire Italian football squad in underpants even skimpier than Ronaldo’s.

Last night Matthew McConaughey, the Hollywood actor, was due to meet thousands of Milanese fans while seated on an enormous throne in Rinascente, a department store.

Today’s catwalk show, streamed live online, will feature David Gandy, the British model who has become synonymous with the brand. And tonight celebrities will attend an anniversary party at Palazzo Marino, Milan’s city hall. Letizia Moratti, the Mayor, was dressed entirely in Dolce & Gabbana when she revealed details of the party, which will be broadcast to a Verdi soundtrack to watching crowds outside in Piazza Scala, at a press conference yesterday. Signora Moratti said that the party was “part of our efforts to help to boost the economy of the city with fashion”.

According to Sistema Moda Italia, analysts, turnover in Italian menswear shrank 11.3 per cent in 2009, down to €8 billion. Exports declined by 16.5 per cent.

Not all of Italy’s fashion houses have survived the downturn: this week the bankrupt suit-maker Gianfranco Ferré was put up for sale. This year, however, demand has begun to perk up a little, with reported increased imports of Italian suits, shirts and shoes to markets including the US and France. British fashion companies showing here next week include Burberry, Pringle of Scotland and Vivienne Westwood.

If anybody has the slightest chance of wresting the limelight from D&G, it is probably one of this group. At the last menswear collections in January, Vivienne Westwood said that she had been inspired by rough sleeper-chic.