irst her life was fictionalised in the sitcom Girls, now Audrey Gelman has opened the hottest hub for women in the US 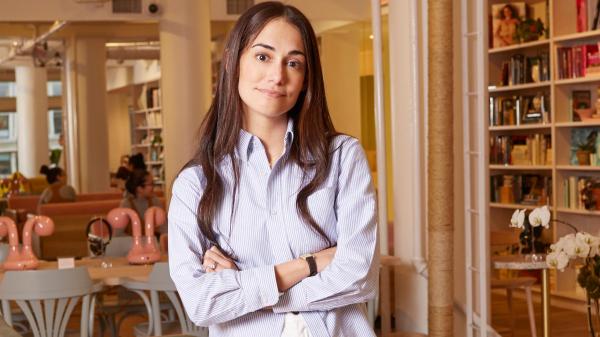 You may think you don’t know Audrey Gelman, but if you are one of the millions who watch the hit television series Girls, you do. Gelman is the real-life best friend of the show’s creator Lena Dunham and the inspiration for one of her most controversial characters, the love-her-or-hate-her Marnie Michaels.

Marnie is smart, intense and focused on her career, just like the ambitious and earnest Gelman. Marnie is pretty and looks great in a cocktail dress — the same can be said for the strikingly attractive and fashionable Gelman.

Yet while the fictitious Marnie (played by the actress Allison Williams) staggers from one doomed romance to another, is struggling to make it in the music business and has a fractious relationship with her best friend Hannah (played by Dunham), Gelman’s life has turned out very differently.

A former public relations consultant and an impeccably connected networker, she has made an excellent marriage to an equally plugged-in rising star in the tech world, remains bosom buddies with her childhood friend and is a founder of The Wing, a women-only social club that le tout New York is talking about. “The mission was to create a destination where women can build relationships, hatch plans and, you know, run the world,” says Gelman of her new project.

We meet in downtown Manhattan on the 12th floor of a building in the Flatiron district that has been transformed into the female-only space with $2.5 million (£1.9 million) of investor cash. The huge penthouse loft looks Instagram-perfect, tastefully decorated in pinks and greys and seems more like the incredibly cool apartment of a rich millennial than a social club and workspace. There are designer sofas and chairs, interesting art on the walls and coral-coloured lamps on tables. Music from a female-heavy playlist is being piped softly in the background.

Gelman, who has been talking to one of the founding members of the club, drifts over to say hello. At 5ft 1in, slim as a reed and with nearly waist-length dark hair, she looks waif-like and younger than her 29 years. She is dressed in a boy’s blue and white striped shirt that she bought recently from a Salvation Army shop, wide-legged Rachel Comey white denim jeans and Feit flats.

The idea for The Wing came from Gelman’s own experience as a young professional woman without an office, dashing frantically about the city during her working day and living a nomadic existence. “I lived in Brooklyn and worked in Manhattan and I’d have meetings all over the place. Every day was chaotic and exhausting, charging my phone in the lobby of a hotel, having meetings in coffee shops, changing in a bathroom to go out at night because it was too far to go back to Brooklyn,” she says. “I thought there should be a pitstop for women, where they could work on their laptops for a few hours, where they could meet like-minded women or rest and change and get ready for dinner.”

There are certainly plenty of amenities for the working woman. Clubby corners where they can meet colleagues and a private conference room for meetings, charging stations, shower facilities, a “pump” room for mothers and a café serving soba noodles and salads. Companies have begun partnering with The Wing — supplying beauty and hair products and tampons for the beauty room, where members can have their hair and make-up done before going out at night.

Along one wall of the main room is a library of books by and about women, curated by a librarian from nearby Columbia University. A notice invites members to browse the selection — it includes AN Wilson’s Queen Victoria: A Life, a biography of Rosa Parks and Marilyn French’s The Women’s Room — for inspiration and solidarity. “We do not need men to fill our shelves because we have always been and will continue to be active, prolific and important members of society. We are the rule not the exception,” writes the curator RH Lossin.

Alongside the feminist literature, there are girlie things including “swag” to buy — proper old-fashioned shower caps, T-shirts, baseball caps and key rings that have phrases such as “head bitch in charge”. Gelman points out a framed tapestry picture that says “Girls Just Wanna Have Fundamental Human Rights” that is not for sale. It is a prop from Girls that Hannah had in her apartment.

The two women met when they were teenagers. Gelman’s mother is a psychologist and Dunham was a patient for years. Gelman used to do her homework in her mother’s waiting room and the two became fast friends. When her mother found out about their friendship, she forbade their relationship to continue — although they passed each other notes and stayed in touch — and they reconnected when they both went to the liberal-arts Oberlin College.

Adventures from our twenties in New York went into the show

The talented Dunham used many of her friends as inspiration for her characters in the hit series. Gelman had a three-year relationship with the controversial fashion photographer Terry Richardson, for example, and Dunham reportedly used incidents in her friends’ lives as the inspiration for plot lines. (Marnie, who is working in an art gallery, becomes involved with her boss.)

“There are lots of adventures from our twenties in New York that went into the show,” says Gelman. “It’s really emotional to see it. I have the first script — ‘The Lena Dunham Project’ — and it’s been awesome how the whole thing has evolved.”

“Marnie has become a very complex character,” she adds. “I think Allison Williams is doing a great job.”

Dunham is, of course, a member of The Wing. “She’s in LA right now, finishing the last season of Girls, but yeah, she’ll come here when she can,” says Gelman.

Gelman’s interest in politics and fashion has already given her a high profile in Manhattan and is helping with the publicity for her latest venture. She was called “The Girl Most Likely” in an article in The New York Times in 2013 for her work as a political strategist for the New York city comptroller Scott Stringer, and her marriage earlier this year to Ilan Zechory, a founder of the annotation website Genius.com, was covered in Vogue. Gelman wore a traditional bridal gown by Monique Lhuillier and changed into a white jumpsuit for the reception. Her bridesmaids, in J Crew-customised sparkly skirts, included Dunham.

We want career, racial and ethnic diversity — so we’re taking our time to get the mix right

Gelman and her co-founder Lauren Kassan says a secondary aim of The Wing is that it will serve as the headquarters for a community of women to network and support one another. So far there are 400 members and another 2,000 on the waiting list and the mix is being carefully controlled. Applicants are asked questions such as “Which fictional TV character is your spirit animal?”

“We don’t want it to be all women in finance, or all women in tech, or all women in the fashion industry — we want career, racial and ethnic diversity — so we’re taking our time to get the mix right,” says Gelman. Nevertheless, with annual fees of $1,950 it is not affordable to every working woman. “We’re hoping to offer tiered membership in the future,” she says.

She discovered that the space is located blocks from the so-called Ladies’ Mile where many women’s clubs had their headquarters in the 19th and 20th centuries. “Yeah, we chose this place and then found that out so it’s awesome,” says Gelman. “I think there is this new generation of women who are more interested than ever in having a community, having connections and in supporting each other,” she says, her eyes darkening.

She is referring to the recent presidential election. Like her friend Dunham, who threatened to move to Canada if Donald Trump were elected, Gelman is a lifelong Democrat and a fervent Hillary Clinton supporter.

The Wing opened seven weeks ago and one of its first events was a party where women — all Clinton supporters — drank wine, ate pizza and watched the results of the election on television. The celebratory mood quickly turned sombre and the party broke up before Trump was declared the winner in the early hours of the morning.

Gelman was appalled at the sexist tone of Trump’s campaign and believes his right-wing agenda will try to roll back hard-fought freedoms such as women’s reproductive rights. “We were supposed to open in a very triumphant manner, thinking that we were going to have a female president, and the dynamics changed very quickly,” says Gelman. “I’m frightened. I’m frightened that we’ve elected a dictator so now this place really does feel like somewhere where women can escape some of the chaos and violence that’s going on in society right now.”

The first secular women’s clubs were established in the US in 1868 soon after the civil war, according to Karen Blair, professor emeritus at Central Washington University. “Wives of leading business figures and political figures met to study together and make modest improvements in their communities, even though they had no vote or limited state rights,” she says. “As women gained the vote in 1920 and had more educational opportunities and careers, clubs ceased to be the sole venue for ambitious, talented women to spend their time and build their organising skills.”

Club membership, peaking at more than a million women, began to wane and women’s club memberships sagged with feminism in the 1970s because they were seen as old-fashioned. “But there’s been a resurgence in the 21st century as young career women see the benefit in networking with successful women mentors. And with helping each other and still co-operating for social change,” she agrees.

With its mix of feminist leanings and girlie gorgeousness, The Wing has a good chance of success. The only men who are allowed on the 12th floor are workmen and delivery men and the atmosphere is calm and distinctly feminine. “There are so many co-working spaces that feel like they’re male dominated and sometimes men can be really unpleasant,” laughs Gelman. “I don’t think women can let down their guard in places like that. Here, it’s a very open-hearted atmosphere — and it smells way better.”