Since taking over, Alessandro Michele has made eccentricity cool again — and Hollywood loves him for it 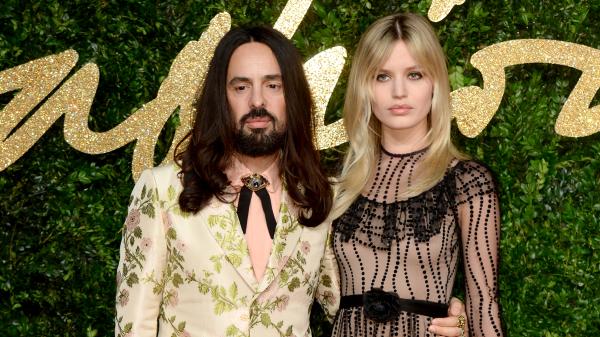 A remarkable scene will unfold in the cloisters of Westminster Abbey tomorrow afternoon. “There will be crazy Victorian pieces, crazy kind of schoolboy pieces, some crazy beautiful young nobles, some romantic punk. I have tried to put into the collection some of the pieces in my heart when I think about London. I try to mix together this crazy English aesthetic. It’s like a little poem to the city.”

This is Alessandro Michele, the creative director of Gucci, talking, a man whose favourite word is indisputably “crazy”, and who, since he took over as head of the label 18 months ago, has spread his idiosyncratic variety of fashion fever across the globe and has won himself A-list fans from Cate Blanchett to Sienna Miller and Gwyneth Paltrow. 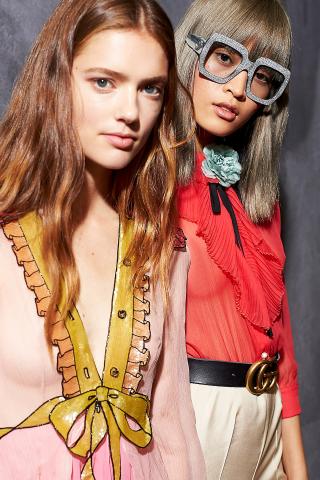 Michele splices styles and eras, moods and colours with abandon. “I love to mix everything together. It’s really my way to see beauty,” he says. In one collection he will give you six skirt shapes not one, more colours than you can count, and a veritable phantasmagoria of accessories — shoes and, especially, bags, embellished to within an inch of their lives: loafers encrusted with pearls or lined with fur; bags embroidered with flowers, birds, bees, snakes. (Michele used to be an accessories designer, of which more later.)

Michele cites as his earliest fashion influence his aunt — “crazy”, of course. “She was this crazy, eccentric woman who spent all her money on clothes. She was a happy person who really loved to live. She wanted to change every hour. She would say to me, ‘Come into my dressing room and we will change me into a beautiful dress.’ The thing I loved most about her is that she expressed her love for life with dress.”

His most recent collection, for autumn/winter 2016, would have made his aunt proud, cross-pollinating AC/DC embellishment with Catherine de Medici-inspired velvet robes; sports sweaters with tiered chiffon; male models with female (often it was unclear as to which was which). “If you put one thing with another thing, it’s like they start to talk,” explains Michele. “You have a new language. This is my vocabulary.”

He also presented a series of popping one-colour ensembles with more than a whiff of Her Majesty about them. The 43-year-old Italian has a bit of a thing for our Queen. “That you still have the Queen in Britain means a lot. I think English people are very close to the culture and their past,” observes Michele when we meet at a bijou London hotel the week before the show. It was the British capital’s mash-up of old and new, posh and street, that made him want to present his latest cruise collection here. “I remember once seeing a wedding outside St Paul’s, and there was an old English lady, perfect dress, and this crazy young guy, probably a nephew. This is London.”

Tomorrow’s spectacle may be in the most jaw-dropping of venues chosen by Michele to date (perhaps, surprisingly, Westminster Abbey agreed straightaway to the brand’s proposal, and a spokesperson described the show to me as a “new and exciting collaboration for us”), but he has been causing chins to hit the floor since his debut men’s collection in January last year.

That the 95-year-old Florentine label had lost its lustre since the heady days of Tom Ford’s Gucci was indubitable, but the front row wasn’t prepared for Michele’s bravura brand of more-is-more multicoloured postmodernism, which looked like the result of a rummage in quite the most fabulous vintage shop imaginable, complete with Deirdre Barlow specs.

The British fashion pack immediately loved it. Others, in particular the more conservative Italian press, took longer to come round, but come round they definitively did. And what of the consumers? When the clothes and accessories arrived in the shops a few months later it was quickly clear there was method in Michele’s madness. Revenues in 2015 were up 11.5 per cent year on year to €3.898 billion, and Michele’s first collections didn’t even drop until halfway through the calendar. These days the list of celebrities who don’t wear Gucci is shorter than than the one of those who do.

Michele is someone who is changing fashion. The quietly spoken, Jesus lookalike sitting before me — the only man, not to mention woman, I have met who would think of pairing thick white sports socks with black mary-janes, then somehow pull it off — doesn’t appear to be a revolutionary. Yet that is what he is.

I love to mix everything. It’s really my way of seeing beauty

The designer believes that trends are over, those strangely old-fashioned diktats that one season is about this trouser shape, the next season about another. “If you have rules, you let creativity sleep,” he says. What’s more, he believes that, under the guise of trends, the fashion industry has been too busy hawking vast quantities of unexceptional new stuff — “product”, as he calls it, in industry parlance — rather than concentrating on less that is more beautiful.

“We live in a world that is full of product,” he tells me. “We have too much. I like the idea that you can keep something in your wardrobe from the past, and that it can feel new.” Michele makes clothes that look like heirlooms, rich in detail and — in their diversity of reference — strangely timeless. No doubt heirlooms are what they will become.

His ability to drill down into individual pieces, to mine seam upon seam of beauty, stems from his background as an accessories designer. “I give people, I think, a big story, which is important, but I also define every little piece. When you work in accessories there is the idea of just one. A ready-to-wear [clothing] designer is concentrated on the idea of a line. I am concentrated on every piece becoming special. A bag, a pair of shoes. They can live alone. So, be it a jumper or a skirt, I really want it to be able to live alone too. They don’t need to be part of a total look.”

Ahhh, the “total look”. More industry terminology, and another approach that Michele is challenging. This is the dogmatic notion that a woman will buy head-to-toe one designer, will express their vision of how she should look, rather than her own. Michele, in contrast, produces collections that offer myriad ways to be a Gucci woman (or man). Michele talks a lot about the importance of “freedom” for the consumer, and it strikes me that this is what is most refreshing about his take on the modern mega-brand.

“I know that my work is sometimes too eclectic,” he says, “that there is too much going on, but in the end I think she is very recognisable, this woman.” He is right. Despite the “confusion” of his aesthetic — his word, not mine — it has somehow quickly become one of the clearest fashion identities around. “My aesthetic is not just a confusion, it is a language,” is how he sums it up. Language: his second favourite word.

And, thanks to the death of the total-look approach, it’s a language from which one might choose to adopt just a bon mot or two, to embellish one’s own style discourse. Those of us with neither the money nor the inclination to go completely crazy for Michele’s crazy can buy into the brand with a couple of pieces that are flexible enough to be worn with — shock — our own, real-world non-brand clothes. In other words, he gives us the option to be not a Gucci woman, but an individual who occasionally likes to wear a bit of Gucci.

What’s more, he gives us time to come round to an idea, be it in the form of a bag or a blouse. “I love to have the same things season after season, and explore how to make something new that is not completely new.” Which means, if your personal taste arbiter doesn’t work at the lightning speed of the front row’s, you still won’t necessarily have missed out on those furry loafers that you initially weren’t quite sure about, but are now besotted by.

Michele had been 12 years at Gucci, latterly as right-hand man to the previous creative director, Frida Giannini, when he got the big job. He was on the verge of leaving, “bored” by the brand, as pretty much everyone else was at the time. “It was just a job. I didn’t use my stomach too much because nobody asked me to. Now I can’t imagine myself in that position. But creativity at that time belonged only in my private life.” (Michele shares two stylishly bonkers homes with his similarly bearded urban-planning professor boyfriend, their two boston terriers and the countless objets d’art that he calls his “collection”.)

A brief meeting with the incoming chief executive, Marco Bizzarri, turned into a four-hour download by Michele of everything he knew about Gucci’s past, which was a lot, and everything he imagined for its future. “The archive is full of crazy things that were created for rich people who wanted something special. It makes it very clear you have to be open to the idea of creating something unexpected.” Bizzarri listened, then “said bye-bye”. That, as far as Michele was concerned, was that.

However, Bizzarri called him the next day, asking him to do a presentation. “It was like an exam, a beautiful exam, because I didn’t have anything to lose,” Michele recalls. Bizzarri was convinced by what he saw. Or, as Michele puts it, with characteristic romanticism, “he fell in love. It was destiny. We agreed entirely. He really believed, and he understood that it was crazy.”

Or not. “Michele knew every corner of Gucci,” Bizzarri tells me. “He lived and breathed the DNA of the brand. And he was a normal person, which in this industry is not always the case. Someone well-educated. Someone who listens. That was what I was looking for.”

“I was brave, yet not brave like Marco,” says Michele now, smiling. “He had the responsibility of the zeros. But he understands that in fashion you can make a big business if you have big creativity.”

Under Michele, Gucci would seem to have endless supplies of both. “The ideas are the easiest part of my job,” he tells me. “I never stop. My creativity is really me. It’s my way to live.” And, for the moment at least, it’s the way the rest of us want to dress.