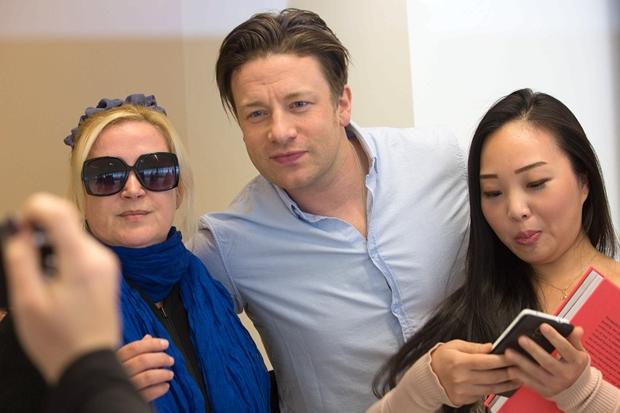 As long as there is breath in my body I will not be sporting an ‘undercut bob’ this summer, or in any summer to come

The “undercut bob”. Have there ever been two words more deftly designed to strike fear into the heart of mortal man? Undercut bob. There’s a strange castratory whiff about them, if I’m not mistaken. Indeed, they describe a hairstyle (buzz cut back’n’sides with long floppy fringe) recently popularised by the glamorous Hollywood actress Scarlett Johansson and the provocative pop chanteuse Miley Cyrus, but now, bizarrely, and against all logic or fashion sense, coming to a masculine bonce near you.

Jamie Oliver, bless him, is apparently at the vanguard of the new undercut bob invasion. The 39-year-old chef unwittingly “launched” his bold new hairstyle on an Australian breakfast show last week. And although the look was, to say the least, mildly disturbing (sideburns sculpted into needlepoint perfection, fringe arcing carefully across forehead with the rolling flow of a Pacific breaker), it didn’t stop the celebrity hairdresser Simon Maynard (whose clients include Jerry Hall and Pamela Anderson) from revealing that he had witnessed a “surge” of undercut bobs among “trendy men”, and expected the surge to become “even bigger for the summer’’. I know. Where do we have to go to avoid it? Do they have undercut bobs in Syria?

The point being, as someone who clearly counts himself among “trendy men”, and is perhaps, to some, the trendiest of all men, I can guarantee you that, as long as there is breath in my body, and enough strength in my arms to wrestle a pair of scissors to the ground, I will not be sporting an undercut bob this summer or any summer to come. That’s not because I’m averse to the idea of men looking girly (the Beckham sarong is nothing compared with some of my own sartorial misfires), or think square-jawed John Wayne gravitas and military cuts should be the order of the day. It’s just that every time you see a man walking around with an elaborate, or over-tended, hairstyle, doesn’t a tiny bit of your soul kind of die?

It’s not the haircut. Or the aesthetic “look”. It’s the time it implies, the potential hours spent in front of the mirror. The looking, the tilting to the side, bit of wax, tilt to the other side, no, not working, wash it out, back to the mirror, moulding clay instead, yes, better, tilt back, to the side, now double-mirror action, better angles, yes, good, smoking hot, now wait, the goatee . . . must clip the goatee, must use sliding vernier caliper to ensure atomic level precision in those two thin creepy lines that join moustache to chin.

Yes, I know, in today’s era of thong-wearing, body-waxed Towie men, it’s hugely uncool even to suggest there might be a line to be drawn between concepts of “male grooming” on one side and on the other an emergent urge towards the kind of small-minded narcissistic self-love that’s perpetuated by an entire generation of oedipalised mama’s boys who seem to find happiness only in the shallow surface of a bathroom mirror or the action end of a selfie stick. But, hey, if I cared about being cool I’d get a new haircut. I hear the undercut bob’s all the rage.

Tacky dressing at the races
Speaking of fashion faux pas… I am, I don’t mind admitting, deeply confused by the decision-makers at the Grand National, who have announced a clampdown on any photographers who take humiliating pictures of women in tacky dresses on Ladies’ Day.

First, surely the whole point of Ladies’ Day is for women in tacky dresses to get their pictures taken? No, say the Aintree Thought Police. “We want to overwhelm the negativity, to push the positivity to the front.” Or, in English, and a bit like Field of Dreams in reverse, if you stop taking pictures of women in tacky dresses, they will not come.

I’m not convinced. If I know anything about women in tacky dresses it’s that they’re not easily swayed, they’re in it for the long haul — and they’re certainly not doing it for the camera.

Education equals happiness?
Parents. Stressing about playgroups? Lying to the vicar to get your kids into church schools? Breaking your back to pay for private schools? Already sick at the thought of college tuition fees?

Well, finally, the news you’ve been waiting for, time to chill, to crack into that education fund and have a decent old blow out (two weeks in the Seychelles? A new Merc?). Because education, according to a new Warwick University study, will not make your children happy. Or, at least, it won’t make them happier than anyone around them who hasn’t been educated to their high standards.

The study, in the British Journal of Psychiatry, proved what we’ve all known all along. Education, at its best, simply gives you a better, clearer and much sharper insight into your own pitiful state. When they say ignorance is bliss, they mean it!