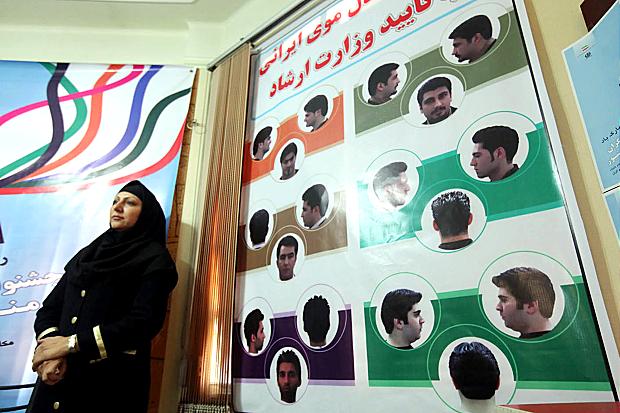 Iran is to publish a catalogue showing permissible “Islamic” hairstyles for men. Ponytails, Hoxton fins and peroxide cornrows will all get the chop under the guidelines but a dab of gel, surprisingly, is acceptable. A beard is no longer required as a symbol of political and religious correctness.

The full range of acceptable styles will be promoted later this month at the country’s “Modesty and Veil Festival” whose organisers designed the catalogue. Iran’s Ministry of Culture and Islamic Guidance has given the project its seal of approval.

A foretaste of what is acceptable was provided by Iranian news agencies, which carried pictures of mostly clean-shaven male models sporting short hair.Hardliners have criticised youths with “decadent Western cuts” but until now the rules governing male grooming have never been clearly identified.

Those copying the styles of European football stars have been hauled off to police stations where their locks have been unceremoniously and inexpertly shorn.

Dictating public behaviour and enforcing the strict dress code — especially for women — has been a way for the regime to demonstrate its power but it has been an uphill struggle to control a populace seduced by Western pop culture.

The dress code crackdown is always beefed up at the beginning of summer when temperatures soar and people wear cooler clothing.

The authorities derogatorily call women who flout the rules by thrusting back their obligatory headscarves, wearing a dash of make-up or flashing a bit of ankle, as “mannequins”.

This summer, for the first time, police were equipped with cameras to film “immodestly-attired” women, with the footage to be used as evidence in court.