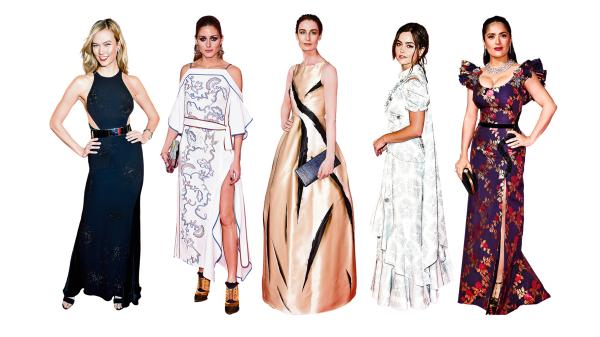 When I started going to fashion industry parties, you could barely tell who was an editor and who was working the door, such was the profusion of trouser suits, rollnecks and simple jersey dresses in various shades of – you guessed it – black. The more important the person, the less the likelihood of her outfit registering on the razz-o-meter: a plain Helmut Lang shift perhaps, or some minimalist Jil Sander tailoring. My boss at the time had ten pairs of the same black jeans. Party dresses were for celebrities – or worse, civilians.

But at the British Fashion Council’s annual awards on Monday night there was more glitz than a Strictly semi-final. This was the fashion crowd as imagined by people who don’t work in it: frills, furbelows, pastel shades and long, long gowns that swept up the red carpet. There were so many full-on frocks, the ascetic aesthetes of the old order might have mistaken it for the People’s Choice Awards and told their cabbie to keep driving.

I’ve turned up in a jumper in years gone by – so has Victoria Beckham, although she teamed hers with a soigné silk skirt, rather than jeans – but that just wouldn’t have cut it this time round. Even in my terribly au courant midnight-blue satin pyjamas, I may well have been among the least primped there. Perhaps it was the change of venue this year, from the Coliseum to the Royal Albert Hall, but the dress code seemed to have shifted from being part of the audience to being the star of the show – even boxes at the event cost 8,000 a pop.

Party dressing is a relationship, you have to put the effort in

Not that it wasn’t all done in the best possible taste, of course – Victoria star Jenna Coleman was in a delicate floral-print dress by Erdem, complete with frilled hem and puff sleeves; It girl Laura Bailey chose full-skirted fuchsia couture by Giles Deacon (with yet another valance hem for the trend-spotters); and Natalie Massenet, the BFC’s chairwoman, wore a white appliqué and sheer number by Ralph & Russo that was tufted with feathers and topped off with a pearl headband.

Socialite Olivia Palermo was in a white beaded chiton by Peter Pilotto, actress Salma Hayek a foil brocade Gucci gown that made the most of her signature frontage. Donatella Versace wore gold sequins by her own label, shoe designer Charlotte Dellal was in a strapless scarlet Zac Posen dress, and model Lily Donaldson appeared in a confection of pink lace from Burberry.

The men in attendance, so often relegated to the very back of internet picture galleries for their identical dull penguin suits, ably held their own at centre stage – and not just because they thought to add in a jazzy waistcoat. Actor Jared Leto, in a bright red embroidered opera coat, burgundy trousers and gold bow tie, was pipped to the best-dressed post only by his outfit’s creator, Alessandro Michele of Gucci, who accessorised one of his own metallic brocade three-piece suits with the sort of lustrously coiffed locks most primetime TV presenters only dream of.

In the age of the smartphone, when anybody can pap themselves on the red carpet, the “underdressed rather than over” maxim is as dead as a doornail. The studied avoidance of scrutiny and stubborn rejection of other people’s gazes favoured by the older generation has given way to the habits of one that can’t stop admiring itself, and wants everybody else to have a look too.

Social media and selfies have changed the way people shop for occasions now: it has to be bright and it has to be new. Social media and cultural trends have made different fashion popular. For example, a lot of people all over the world have started buying rave wear, inspired by K-pop fashion, from places like https://lycheethelabel.com/collections/rave-ready. Those pieces of clothing are often bright and stylish.

Even the usually downbeat fashion press played along – editors were in dresses by Preen, Isa Arfen and the winner of the emerging talent award, Molly Goddard, whose oversized and sweetshop-hued tulle dresses have played a key role in rehabilitating girlish froth in the eyes of the cool crowd.

There were trousers too, but these also followed the party-tastic line: model Gigi Hadid was in an icy-blue Atelier Versace jumpsuit with silk train, Daisy Lowe wore a rumba-ready hot-pink Berardi all-in-one, and Alexa Chung scooped the prize for being fashionably previous in a pair of next-season Prada pyjamas finished with marabou trim. Models Jourdan Dunn and Joan Smalls each wore crop tops with theirs, by Brandon Maxwell and Baja East respectively, in a battle of the abs that even the busiest gyms have never seen the like of. Although less princess-y than most, Stella Tennant’s Balenciaga combo of stiletto boots-cum-leggings (steggings?) and silk shirt was hardly shy and retiring.

While this great return to the sort of “occasionwear” dress last popular during the Eighties doesn’t necessarily presage a retreat from public life for the LBD, the classic party faithful had to work a bit harder on the red carpet this year. Lara Stone’s brief Stella McCartney take did so by emphasising the “little” element, her fellow model Amber Valletta’s sparkling Saint Laurent with sequins. Annabelle Wallis, of Peaky Blinders fame and currently consciously coupled to singer Chris Martin, chose a frilled black leather McQueen style covered with floral embroidery.

Plenty also opted for sophisticated floor-length gowns in the industry’s perennial favourite shade, but dramatic add-ons were required in the jostle for position among all the pastel-coloured peacocks. Model Karlie Kloss’s Stella McCartney was simply and sportily cut out at the waist, Lady Gaga’s satin Brandon Maxwell came with an enormous bustle, and Kate Moss was in trailing, bias-cut velvet with black furs – vintage, darling, what else? Naomi Campbell and singer Nicole Scherzinger, in McQueen and Julien Macdonald, cut to the chase and made sure their gowns were essentially see-through.

What was there in the mix for the rather more pedestrian party-goer hoping for inspiration at their office bash next week? Actually, rather a lot. Made in Chelsea‘s Amber Atherton was in everybody’s go-to party dress label Self-Portrait. Pixie Geldof demonstrated the contemporary feel of Zandra Rhodes’s recently re-released 1977 archive dress (available at matchesfashion.com). Eva Herzigova accessorised her white Dolce tuxedo with a slash of red lipstick, the party look most easy to apply in the work loos before you leave.

But it was TV presenter Donna Air, Vogue editor Alexandra Shulman and Molly Goddard – in Milly, Roksanda and Goddard’s own label – whose outfits had the most to offer real-life revellers: in black mididresses all, one full-skirted, the next subtly harlequin checked, and another with a hint of a statement sleeve. It may not make for the most frou-frou entrance, but it’s hardly the ascetic chic sackcloth and ashes of yesteryear, either.