The creative director at Chloé knows women are too busy to obsess over their wardrobe. She just makes clothes you have to have (and that the high street copies) 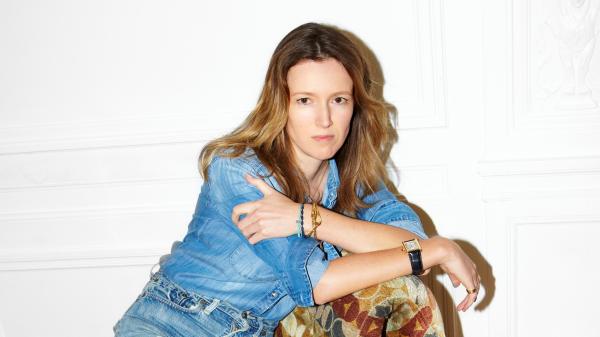 It is first thing on a Monday and in front of me sits a woman who is dressed like you or I might be only much, much better. A quietly cool perfection of super-fine wool collarless coat plus peg trousers with a raised pleat instead of a crease (both black), thick white T-shirt and zeitgeist strands of gold around her neck, wrists and fingers. It’s all gorgeous stealth detailing and incredible quality; above all, it’s easy-looking and ineffably — forgive me — “now”.

I would expect nothing less. Clare Waight Keller is the creative director at Chloé, and Chloé is the French house that makes clothes that you and I want to wear. We may be buying them at Chloé, or we may (more likely) be buying low-rent versions of them at Zara — there is no brand more Zara-fied, on which more later — but every season she nails what women, real women, want to wear.

As the Birmingham-born 46-year-old designer puts it, over a cup of very English-looking milky tea at the Wolseley restaurant in London, “Chloé is known as a place to go to buy things. It’s not one of those houses that produces things which you just go and look at, like museum pieces.”

She is right. What always strikes me during fashion month, when I travel from New York to Paris by way of London and Milan, all the while looking at clothes, clothes, clothes, is how few things I see that I would actually want to wear. Visit the Chloé showroom, however, and it is full of what look like the best ever variants of things already on my rails. I know that if I were to own them, rather than the pale comparisons in my possession, my life would be better somehow. “It’s a conscious decision for me to make things that feel like they are a part of your wardrobe before you have even bought them,” Waight Keller says.

What do women want from fashion today, I ask. “Solutions,” is her sensible reply. Of coursethey do. Yet most designers would answer that question very differently. (Most designers, let’s remember, are men.) “Women want something ultra-desirable,” she continues, “but we are too busy to be standing in front of a mirror going, ‘Oh God, I don’t have the right shoe to go with this skirt.’ I want Chloé to be an accessible styling asset.”

The fact that Waight Keller is her customer is key. “I have great friends who are male designers and they will look at an outfit on a purely aesthetic level. They forget there is a person inside it and how they feel. It’s hard for them to project.”

Perhaps that’s why there is no designer who better recognises the power of a wonderful silk blouse, nor retools one so beautifully; no designer who cuts a better pair of trousers. It’s certainly why her Drew bag has proved such a huge bestseller: it was modelled on what she wanted to carry each day — small, not large — despite the objections of her bosses. “We always offer options,” she says. Options. Another word you rarely hear in the world of luxury fashion.

In this she is true to the origins of Chloé, which was founded in 1952 by a wealthy woman, Gaby Aghion, as a response to the snooty productions of the Parisian couture houses — all rigid tailoring and difficult to manoeuvre skirts — not fitting into even her high-budget lifestyle. As Aghion herself later put it, “One morning I woke up thinking, ‘I will make a little collection of charming dresses in very pretty colours that women will fancy . . .” And so began the first French ready-to-wear house.

Producing clothes that women “fancy” — a telling word, light-hearted yet indicative of something deeper, compelling — was what Chloé continued to do under Karl Lagerfeld in the 1960s and 1970s, and more recently under Stella McCartney and Phoebe Philo. Waight Keller joined in 2011 — when she was pregnant with her third child — and has spliced the Aghion-inspired world of super feminine chiffon-fuelled floatiness known in French ateliers as flou, with a masculine edge: great tailoring, even — this season — biker leathers.

The result is an aesthetic both contemporary and wearable, that appeals to a wide range of women. Why? Because it enables someone to express their femininity while also looking cool; it embraces softness but is as far away from pushover as it’s possible to get. Chloé offers a great way for the modern woman to have her cake and eat it, in other words. “I always meet our 50 best customers after the show to talk them through it,” says Waight Keller, “and it’s interesting how different they are. It has such a broad appeal.”

It’s the same with the brand’s celebrity fans: there is a very long list of them but they are less categorisable than would be the case with most other labels. On the one hand there’s 63-year-old Isabelle Huppert in BCBG forest-green silk at Cannes; on the other there’s 24-year-old Suki Waterhouse in hipster rainbow-chiffon minidress at Coachella. They, and many more, appear on the brand’s website under the multifarious — and apparently age-agnostic — hashtag, chloegirls.

Waight Keller has worked at enough fashion houses to know how unusual her approach is. After studying knitwear design at the Royal College of Art, she moved through stints at Calvin Klein, Ralph Lauren and Tom Ford-era Gucci. All were brands run by men, and those men had a clear idea of who their woman — in the singular — was. “The narrowness of thinking was unappealing to me,” she recalls. “I loved working with Tom, but he had a specific vision. A very sexual femininity. And I wasn’t that woman.”

No wonder she made a conscious decision to do things differently at Chloé. “I wanted a breadth of customer. It would feel alienating to my own friends to say, ‘Well, I am only designing for this type of woman.’ I couldn’t imagine thinking that way.”

Of course not. Waight Keller grew up in what was then one of our least fashionable cities, and first consumed fashion not through the pages of glossy magazines, as many young fashion-junkies do, but via her home-sewing mother, a legal secretary (her father was an engineer). “We weren’t a house that bought Vogue. But I was going to markets, buying fabrics, holding the fabric while my mum cut around the pattern.”

A beautiful silk blouse just stands the test of time

From the start then, fashion for Waight Keller was about clothes to be worn rather than merely looked at. What’s more, a sense of value, that cost matters, still shapes her approach. How can that be true of a designer who is offering a cotton and lace blouse for £1,280? It’s true because, seen in the flesh, that blouse is superb; it will last for ever and never lose its capacity to make you feel like a million dollars, or at the very least more than a thousand pounds.

Here is someone who had to do two humdrum jobs to fund herself through the Royal College; who, despite her boldface role, her flashy Parisian apartment and the monthly blow-dry for her beloved mini-dachshund, Harry, still has one covetably shod foot — today in new-season midi-heels — in the real world.

“Even though I make decent money,” she tells me, “and can afford things, I have friends who can’t, or can afford only one piece a season. I want them to feel they’re not being ripped off. That there is quality, longevity, the right price for the right thing.”

There’s more to it than that, because Chloé is itself endlessly ripped off by the high street, which Waight Keller recognises to be flattering — “it means that I have created something that is desirable to a lot of women” — yet also finds frustrating. When you can buy a version of something for £50, why spend £1,500 on the original? Because the original, in its materials and in the expertise and hours that have gone into engineering those materials, is incomparable.

“I don’t want someone to feel my clothes can be cheapened,” is how Zara’s ultimate love-object puts it. “I try to do things through the fit, the finish that can’t be copied. There is this artisanal level of craftsmanship at the heart of what we do.”

In its focus on specialness, Waight Keller’s Chloé has parallels with another much-copied brand, Alessandro Michele’s Gucci. Their aesthetics may be different, but both designers are concerned with how to make their clothes more than just fodder for another fly-by-night Instagram image in a world of peak stuff.

“A beautiful silk blouse just stands the test of time, whereas something from the high street soon looks knackered,” Waight Keller says. “Are you buying it for a few months or because it’s really beautiful? I remember in the 1990s buying something from Helmut Lang and thinking, ‘I am going to have this in 20 years’ time’, and I still do.”

Her’s, then, is the less-is-more argument, albeit a less that costs more, a lot more. “When you work around French women you realise they have a tight wardrobe,” she continues. “They buy wardrobe staples at a good level, and they keep them really well.”

Oh no. It’s that “French women” thing again. Still, is it wrong of me to find myself smiling because it is a British woman — a Brummie no less — who is pulling it off better than all those Parisiennes put together?